April 20th, Friday.
I got a personal zither lesson by Ms. Edith Trieb. At first I got her lesson on the “Fruelingstraum”. I learned this wonderful music three years ago.
I have fully studied it in my heart, but I could not demonstrate so good play in front of her as I did in my home play.
She gave me a new music for my next homework.

The next lesson was by Ms. Veronika. When we started the lesson, a local TV camera man entered to our lesson room to shoot movie. I thought zither players from Japan might be still so seldom seen.
I got a good lessen from her about “Sonatine F-dur”.
I also lerned VARIATION of old folks musc from Austria.
In the afternoon, we got a lesson about ensemble play by Mr. Jan Roelig.

In the evening we had special lecture of music theory related to zither by Mr. Jan Roelig. Jan’s daughter personaly translated the contents into English to me. I was very happy to that kindness.

April 21st, Suturday.
Today’s zither personal lesson is by Prof. Scharf.  Many zither students came in our lesson room. So, I was a little bit nervous. But I could play my homework music of arpeggio.
Prof. Schaf gave me a new Etude for my next homework.

In the evening, zither concert by our zither teachers in a hall. Prof. Scharf played with Wuensche’s new type Harp Zither. The name of this zither is Scharf type Harp zither. The zither is a little bigger sized and its sound was very soft and deep.  We enjoyed very much excellent play by the teachers in good mood. 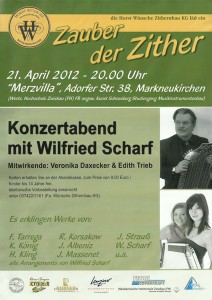 April 22nd, Sunday.
The final day of the seminar. We got a lesson from Mr. Jan Roelig for group play, and later I observed the lesson of E-zither. I was very much interested in E-zither, specially in respect to making good sounds by electronic processor and so on. I like to play normal zither music with my E-zither, but not for Jazz. Because tempo of Jazz is too difficult to play for me.
Before lunch time, we received certificate of seminar attendance from  Prof. Scharf one by one in person. Then, we said “Auf wieder sehen” each other. 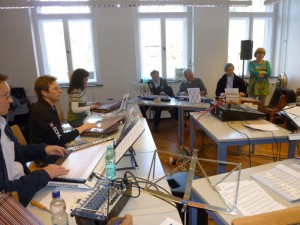 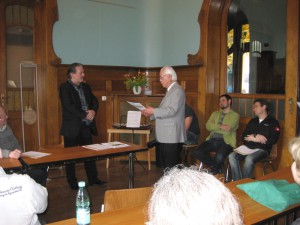 April 23rd, Monday.
I reached Frankfurt by train, and got JAL  night flight to Tokyo.
At Frankfurt airport, I was asked by a lady of security checking inspector to play my zither for her.
I played Edelweiss with my zither. Then the security inspection corner became quiet, while the inspection operation was suspended during my playing. When I finished playing, suddenly many hand clapping by the inspectors and passengers sounded on the floor.

I arrived at Tokyo safely. I was happy to have many important and wonderful experiences during my travel this time and would like to say my heartfelt thanks to all my dear friends and teachers in Europe.